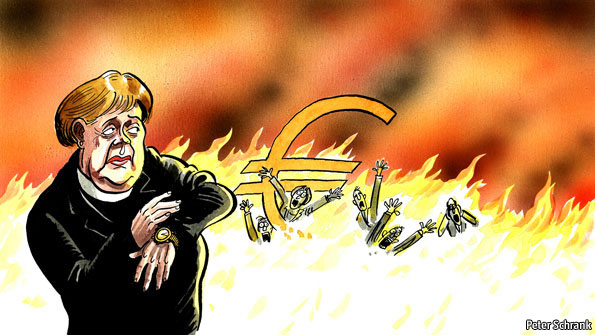 TO HEAR Germany say no to fiscal stimulus, no to boosting the euro zone’s rescue fund, no to joint Eurobonds, one begins to wonder: does it really want to resolve the euro zone’s crisis? Of course we do, most Germans would reply. Is not the chancellor, Angela Merkel, the first to declare that “if the euro fails, Europe will fail”? Is Germany not the main provider of rescue loans to Greece, Ireland and Portugal?

All this is true. Yet Mrs Merkel seems to lack a sense of urgency. Despite the world’s calls for action, she does not believe in bold strokes—be it letting Greece default, or issuing Eurobonds to mutualise governments’ debt. Only a slow, step-by-step approach will work. In other words, the pain, austerity and market turmoil will go on for the foreseeable future.

Even though it pains me to bring attention to a rather silly opinion piece on the Economist, I just have to point out a few things about the piece linked above.

First of all, having a sense of urgency is not the same as panicking, which, to a German, is how many of the bold-stroked measures implemented by the USA or Great Britain feel like. "How much money can we find to just give away?" is not a position I would like my government to take.

Second, I object to the off-handed description of Germanys institutions. The "complex federal system" isn't any more complex than any other federal system, like, say, that of the USA. A sceptical public is a good thing for a democracy. Coalition politics are about finding compromises and will only appear messy to someone coming from an either/or-system, which feels very primitive to many Europeans. And finally, "jealous institutions such as the constitutional court"? Really? Jealous? A working, well-respected institution that upholds the central law code of a country is "jealous"? This, as well, coming from a resident of a country where the constitutional court feels like just another venue for political puppery, doesn't actually feel like an insult and instead more like a praise.

Third, there is growth. I don't want to comment more on that topic than saying that "X is weakening growth, thus X is bad" is not a valid argument until you have proven that growth is important. I know that many people assume this automatically in the United States, but it's not a given in other places. And, at least from time to time, you should think about it.

Then there are the weak arguments. Charlemagne quotes that one problem with seeing slow steps as a problem "is that market panic can become self-fulfilling, in many different ways". This is supposed to be an argument against a transaction tax. A tax that would temper the possibility for panic and create a cushion for when it occurs is held as an argument against that tax.

And, finally, there is the obsession with the german language. Yes, "Schulden" does share the same stem as "Schuld", just like, for example, "candidate" and "candid" share the same stem, even though most candidates aren't. Or "champion" and "Kampf" (which means struggle or fight). Language is a strange beast and goes wounded ways. Bringing up the similarity between Schulden and Schuld (which, by the way, also means "debt" in this context) feels like filling up for missing real arguments. Oh, and also, bringing up the protestant past for a country where less than half of its inhabitants believe in any spiritual force isn't really a strong point, either.

Actually, the more I read this piece, the more I get the feeling of a very strong cognitive dissonance. On the one hand, Germany is bad for letting "the fires burn", on the other hand, Germany seems to be very stable and financially secure at the moment. It's sad that even such a careful observer as Charlemagne seems to be likes to forgo arguments for rhetoric once in a while.