A friend recently sent me a link to Jane McGonigals excellent TED talk about Gamification. Watching it, I was reminded of the Mother Of All Gamification talks, Jesse Schell's Visions of the Gamepocalypse. I really enjoyed both of these talks, but I don't like their conclusions. 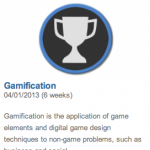 Even Coursera now offers courses on Gamification. Which is fitting, I guess, since university courses have been "gamified" with points and regular feedback for a long time.[/caption]

What both Schell and McGonical want to do is make games that "trick" the player into doing something with himself or his surroundings at the same time. I don't think that's going to work. For one, because it's dishonest, not telling the user what you're actually trying to achieve with the game. But more importantly, because they are diluting the game design and experience with their ulterior motives. Did you play educational games when you were young? Probably Math Blaster! or Mario Teaches Typing? We had some of these when I was small and I never liked them. The reason is that you're playing a nice little game and suddenly something interrupts your flow with a math question. That's not a fun game mechanic. That's not any game mechanic, actually, that's just an annoying block between you and the game.

There is a second mainstream meaning of the word gamification, which is "turning some task into a game". Wikipedia has a nice list of things that belong into this category, i.e. things that people have tried to do. I think that's not the right way either, because I don't think that achievements (as funny as they may sometimes be) are the way to use the knowledge and power we have learnt from games to make the world a better or easier place. I also think that achievements, specifically, are a pretty poor game mechanic that's been used in recent years because they're so easy to make (however, hard to get right), in contrast to meaningful in-game achievement without a badge, which is pretty hard to manufacture.

There's a nice explanation on Youtube how Mega Man X gets it right. And did you know that the iconic first level of Super Mario Bros is designed exactly to show you what you can do in the game? Jumping, hitting blocks, getting coins from � blocks, enemies that are dangerous and that you can defeat them by jumping on top of them. All of that from one single screen, and in less than ten seconds. Without a single text display.

That is great gamification. They "gamified" their intro/tutorial and showed the player all these things effortlessly. Designing that level must have taken very long, but for the user it's so incredibly smooth. So that's one component of gamification for me: show instead of tell. Let the customer find out what's possible on their own, without bugging them, by making it easy, almost obvious what and where things are to find. Let's call this property "Leading", because a properly gamified systems leads the user towards actions that are beneficial.

The second component of gamification that is most widely discussed is Motivation. Points: 000000
Achievement locked
Can you scroll to a million points? Will you?


Let's stay with Mario for a second: Mario has a coin counter and a points counter, and they are constantly increasing, all the time. Every time you do something, you get points or coins or both. So, in the simple gamification models of today, the designer would say "we need to motivate the player feedback to do something, so let's add points to it!" That has been done, to great effect, and I guess it can work—for the right kind of person. But I'm not that kind of person, and to me it feels very childish to attach meaningless points to meaningful tasks, which is exactly what Jesse Schell points at in his wonderful talk. There are systems, games, out there, that try to do this sucessfully (by Miss McGonical again), so they demonstrate that it works for some situations and for some people. However, the point counter in Mario isn't really the reason why one continues to play, is it? The point counter is merely an indicator that you're going in the right direction and how far you've gotten. As such, it's great, but it's not the motivator. The motivator is something different: curiosity, urgency, "just one more level", epicness, or something like that. This is what we have to take from games into the real world, not the stupid point counter. Of course, taking something so fluid and hard-to-grasp like motivation from a game and modelling a real-world task with that in mind is very hard. So it's natural to try out simple schemes first, like the point counter. But I think that a properly gamified system should motivate the user through its properties and its whole, not through meaningless points or achievements. So, let's take Motivation as our second component.

There are a myriad ways to model and channel this motivation, like levels, stages, medals, progress, goodies or, yes, achievements. In fact, there are so many that finding the right combination for a specific situation can be pretty hard.

Another important concept that helps form and channel user Motivation are reward schedules. And these are actually being taken into consideration when doing gamification. Some people proclaim that gamification should make tasks in the real world harder, but I don't think that's the case. Rather, it should move the challenge and the reward closer together, but keep the overall challenge/reward levels about the same. Which, thanks to human psychology, actually makes the task easier to do for a person. Brushing your teeth is a great example here (and the reason why Jesse Schell used it), because there's a challenge and a reward and they are very far apart from each other. The challenge is to brush your teeth twice or thrice a day. The reward is that your teeth will not develop problems and pain for you at some point in the future. So in this case, the world we live in is badly gamified, because the effort has to be put in right now and frequently from now on, while the reward is uncertain and a long way away. Humans are just not good at that kind of schedule, so here's something to be optimized. However, changing the reward schedule for brushing your teeth doesn't make it any harder or easier to do, it just makes it more natural for humans to do. In a way, a good reward schedule makes it easier to mine the motivation a person has for any goal and to apply that motivation in the right direction towards achieving that goal.

There are very simple ways to do that and very complicated ways, but there are ways. I think we need to be getting better at finding them. Still, Motivation, one of the central points of Gamification.

The third point I'd like to add to the essentials is Feedback. Humans love feedback and they need it to function properly. Giving people feedback on any process allows them to get better at it, so that's what they will do naturally. Let's look at our two examples from above. When you brush your teeth, there is some feedback that you did well: a fresh breath, smooth teeth, and a whiter smile. If you skip once or twice, that feedback will deteriorate, so once you stopped brushing your teeth the feedback won't work as well as before. However, there's also very little clear indication about how good you did. There's no way to check that you brushed everywhere, that you brushed enough and that you brushed for long enough. So the feedback loop isn't very good, and that's probably the reason why you don't know anyone who's a master a brushing their teeth. Now let's analyze Mario. In a game of Mario, every action you take has a clear and consistent feedback value. Jumping on an enemy: happy sound, enemy dies and you get points (and sometimes even a shell). Bumping a � block: points, coins and another happy sound. Walk into an enemy: sad sound, your character falls of the screen and a live is deducted. Note that all of these actions are visible and clearly good or bad. If you do something that's very good, like finishing a level, a small fanfare is played and you get to see a nice little cut scene. Playing Mario is one giant session of trial and feedback. Some people say that positive feedback is all that makes a game good, and I tend to agree: give a person feedback on what they're doing and they'll get better and better at it.

Most systems we use today are not very good at this. This is sad, because there are so many simple things one could add to most systems to make them give proper feedback, like status display, diagrams, scoreboards or suggestions for improvement. People can master any system as long as they are shown whether what they're doing is good or bad. 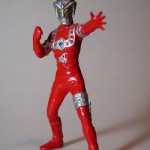 Our hero begins his quest with a vow to finish this article.
There is a fourth point that is central to any gamification effort you want to undertake, and that is narrative. People crave narratives of any kind. So much in fact, that they will create their own stories for something as simple as a 32 x 16 monochrome display, showing a state machine with less than 16 states, making them bond with that state machine and get up in the middle of the night to 'feed' it. Note, however, that Tamagotchi is an excellent distillation of Feedback and thus masterfully gamified: people want to carry the toy around and care for it every day, no matter its simplicity, creating Motivation and Narrative out of the players themselves.
Some of the most well-known and loved toys and games of the world are simple playgrounds for creating narratives: Lego, Barbie, Playmobil, The Sims and, of course, Minecraft. All these games offer is a rich environment for creating your own stories and adventures.
At the same time, even the most simple-minded games offer some kind of background story, whether that may be furious birds or supertechnology soldiers.

The truth is that Narratives make it easier for people to understand a situation and muster up Motivation for it, even if the Narrative is quite thin. Even if you know that the princess is in another castle, here's a good and simple reason to slog through all these complicated worlds: find the princess and rescue her. Be a hero!

Sometimes, team selections are used to create a simple but powerful Narrative: us against them. That seems to work for all recent 3d shooters, even if the teams are absolutely identical.

In a way, Narrative is also something that McGonical and Schell point at and want to use as a tool to motivate the player. It's just that the methods they choose (point counters and badges) are quite crude and not very well-fitting, in my opinion. However, it's also true that Narrative is probably the hardest to add to any Gamification project that is not actually a game. How would you fit a Narrative (that is not totally moronic) around brushing your teeth or doing your taxes? I don't know! But figure it out and you'll have the power to help people do something important. And you'll find easy ways to collect your reward for that - even if it's just the knowledge that you're a hero!

So, to recap: Leading. Motivation. Feedback. Narrative. Add these four to any system you are designing, and you will have a properly gamified system that will work very well.

It's hard to tell how to actually use these things in any real product, but I think it's still worthwhile to start thinking about gamification on a broader scale.